NooShift Review: Can These Pills Really Enhance Your Focus?

Nootropics have started to flood the market with an amazing number of products. Truthfully, not all of them are actually able to help you enhance your cognitive functions. That's why we wanted to test out the all new NooShift by Project Noo You to see if it does what it claims to do. Read the full review down below to find out more!

It is well-known fact that certain nootropics can indeed enhance your cognitive functions as well as focus levels. There is huge scientific evidence backing this up [1] so if you don't believe us, go ahead and do some proper research.

Unfortunately, there is an abundance of low-quality nootropics out there on the market. Many manufacturers have gone on with the nootropics wave and created unfinished and potentially dangerous products that should be avoided at all costs.

With that being said, today we are going to check out one of the newest ones. It's called NooShift and is made by a relatively new company called Project Noo You. Can NooShift live up to the expectations or is it just another half-finished product? How well do its ingredients pair up against the competition? And finally, what sorts of results can you expect? All that and plenty more in the following NooShift review!

Before jumping over to the NooShift ingredients, first we'll take a quick glance at the label: 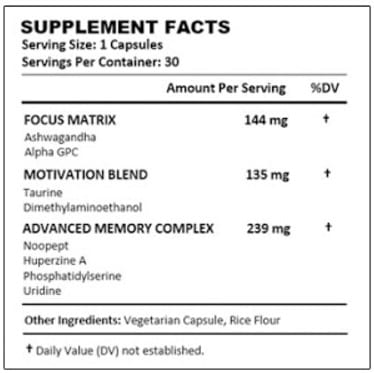 Ashwagandha root extract is a quite popular ingredient these days. It's used for anxiety reduction as well as enhancing memory and focus.

In addition to increasing speed and agility, Alpha GPC is also used for enhancing cognitive functions. It's a popular nootropic that has already found its way into a lot of supplements.

AKA DMAE is an amino acid produced in the brain. Among other thins, DMAE is used fo treating Alzheimer's. In the world of supplementation, DMAE is used for enhancing concentration and memory by increasing acetylcholine levels.

This is a synthetic nootropic molecule with a similar effect as Piracetam – it provides its users with a cognitive boost and a mild psychostimulatory sensation afterward.

Huperzine A is a naturally occurring alkaloid extracted from firmoss. It is used in NooShift because of its ability to enhance memory and promote faster learning.

This is a very versatile one – not only does it increases focus and concentration but also enables to you recall old and learn new information quicker.

This ingredient is basically a nucleotide base. Some studies suggest it has positive effects on cognitive functions and memory.

As you can see, NooShift contains several highly popular ingredients that are being widely used in similar products. Unfortunately, since it incorporates 3 matrixes, the exact dosages of each ingredient is unknown. Since we don't know that information, we cannot say for sure just how good NooShift really is. Still, from the looks of it, it seems to have a solid mixture of active ingredients all of which are well known for their cognitive enhancing effects.

NooShift side effects – Should you be scared?

When it comes to the potential side effects caused by NooShift, here is what you need to know:

First of all, a few users have complained about low heart rates. Since this could be life threatening to people who already suffer from slow heart rate, it's important to point it out.

Second, one user has experienced GI blockage caused by the excess of mucous caused by Huperzine A.

“NooShift gave me GI blockage. Even though it does help with concentration and learning ability, I would still not recommend it to people with a history of GI problems…”

What do other people have to say about its effects?

Even though NooShift hasn't been on the market for that long, it still has more than few useful reviews available online. Here's what people have to say about it:

“I definitely felt an immediate increase in concentration and focus. I've never had an easier job with my taxes. Great stuff!”

“NooShift is awesome! It helped me get my Masters Degree in Modern Arts and finally complete my first painting album. Love it!”

And finally, here's a great review that pretty much sums up this NooShift Review:

At the moment, NooShift is only available from their official website. They also have a 1-year guarantee program. Feel free to check it out for further info.

The Final verdict on this product?

So, with everything taken into consideration, it is time to say a couple of final words about NooShift. From what we've had the chance to see, NooShift seems like a solid nootropic, even though its manufacturer is a brand new name in the industry.

They've done a good job with the ingredients and customers have already started noticing it. That's why I believe it is quite clear that NooShift isn't just another unfinished product. It has the potential to provide you with an optimal work environment for success. If that's what you're looking for, then NooShift is the answer!

Consists of Ashwagandha and Alpha GPC.

Ingredients found inside of Focus Matrix are both well known for their ability to enhance mental focus and cognitive functions.

There is a clinical research done on male rats which shows Alpha GPC to increase certain cognitive functions. [2]

Consists of Taurine and Dimethylaminoethanol.

As its name suggests, Motivation Blend is supposed to increase your motivation for even the most difficult of tasks at hand.

Unfortunately, there are no firm clinical research studies that prove the above-stated effect.

Consists of Noopept, Huperzine A, Phospatidylserine, and Uridine.

This ingredient blend aims to increase your memory capacity. This will result in the better recalling of older memories (might cause mild nostalgia) and remembering new ones.

There are some research studies which show the increase of memory capacity. [3]

Represents the slow rhythm of the heart.

What Causes a low heart rate?

Huperzine A is known to cause this.

Partial or total blockage of the intestines which can be potentially dangerous if not addressed in proper time.

Huperzine A is the most likely culprit for this as well.

How much does NooShift cost?

Does it really work?

Judging by all we've seen, I'd say it works just fine. The ingredients are on point; the users are satisfied… So, as long as you're not suffering from any heart conditions, you will definitely be happy with the effects you'll get.

Where can I buy it?

As it's already been stated above, NooShift can only be bought via their official website.

“Nootropics are smart drugs… but they are drugs nonetheless. Make sure you don't get addicted to them…” – Theo