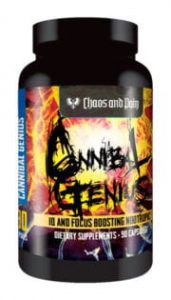 When it comes to supplements available in stores around the world, many times it seems like it’s one and the same thing going in circles, getting re branded and produced by some new company with an occasional new ingredient. Whether a new stim based pre-workout or a hormone precursor, it’s usually nothing we haven’t seen before and it can get a little bit dull.

This is where Chaos and Pain saw an opportunity to try and introduce something completely new to the market, something refreshing and powerful and quite frankly a little bizarre when you first hear of it.

Cannibal Genius is a product designed to improve your cognitive function. The manufacturers of this compound are promising improved thought processes, focus and general improvement to every aspect related to intelligence. This certainly sounds like an advertisement for a miracle pill seen in sci-fi movies, so we set out to find out if the product actually does any or all of what it promises to do.

Ok, so let us first have a look at what kind of ingredients Chaos and Pain decided to put into their product for improved cognitive function. Here is the full list:

Cannibal Genius is one of the Cannibal series of products introduced to the market by Chaos and Pain. The formula uses a number of natural ingredients and powerful stimulants not often found in other products to influence your brain cells and improve all sorts of mental functions.

While the manufacturers have not provided too much insight into how every specific compound in it works they did provide us with information on some of the compounds and how they are supposed to work.

The Noopept compound found in Cannibal Genius is a nootropic that has been proven by various studies to reverse the effects of both old age and alcohol abuse as well as improve cognition and memory in general.

The Acacia Rigidula is an intense and durable stimulant containing more than 40 amines, for a broad spectrum of cognitive effects.

Other ingredients such as Ginko Bilboa, Theanine and Naringin have been well documented to also aid various mental functions and in combination, this blend does promise some great effects. But as always it is only through testing that you can determine if a compound works and this is why we went out and searched for user testimonials from various sources to see how they did on Cannibal Genius.

The uses of Cannibal Genius are various. While the product is supposed to be a good pre workout formula in some ways, as it enables you to focus on your workout and not get distracted by outside elements or the stress of the workout itself, Cannibal Genius also promises great results with other activities, such as reading, studying or any other form of mental work.

When put to a test, Cannibal Genius, amazingly enough, did work. Various people have reported greatly improved cognitive function, faster thinking, better focus and generally improved mental functions. As amazing as it may seem, in many ways Cannibal Genius will give you a temporary boost of IQ, allowing you to perform better mentally for some time.

Here are a few of the testimonials regarding Cannibal Genius we came across:

I had to try it after reading about it. I am glad I did. I used it for three days and ordered da Vinci to try as a stack. It gives you an extremely calm and relaxed feeling and all of the information around you feels a little bit easier to absorb. I take one or two a day and I feel on top of my game. I honestly can't wait to see the next thing CnP introduces.

I love all CnP products and owe a good amount of my success at work to them. A new parent never getting a good sleep mixed with late nights and early mornings at work could be a combination to create a complete useless shit bag. Thanks to Ferox and Genius though I'm seen as one of the most switched on and motivated guys. Never dozing off, never groggy, and always firing on all cylinders.

Amazingly enough, Cannibal Genius actually seems to work like a charm for most users. It provides extreme focus, better access to memory and generally improves cognitive functions to the point where you can actually say it increases one’s IQ. There are few such products on the market that can actually boast efficiency, and this is why I believe you should give Cannibal Genius a serious chance before tossing it aside as marketing scam. This product actually does work.