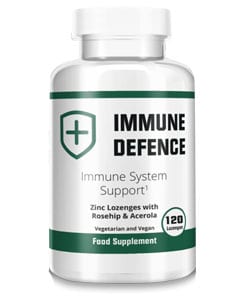 This post's is no rating for now

It strengthens the immune system
It’s not only for building a strong immunity but for the overall well-being.
It can shorten and alleviate symptoms of colds and flu.
The supplement’s packages are available with fast and free shipping
It can be used by individuals 12 years old and above
It can be taken easily in the form of a lozenge.

It is more expensive than other immune-boosting supplements.
Not everyone will enjoy its taste.
It may cause abdominal pain, nausea, lethargy, anemia, and copper deficiency if taken more than the recommended dose.
It can only be purchased online on the official website.

In trial times like this amidst the pandemic COVID-19, your body needs excellent support to strengthen its defenses against microorganisms that could cause illnesses and to stand up against stress. Immune Defence is a supplement that boosts the immune system to defend the body from diseases and illnesses. Immune Defence supports your immune system by providing you with a daily dose of zinc and vitamins A, C, and E. It comes in aniseed-flavored lozenges that are soothing and quickly dissolving at the back of the tongue, bathing the end of the throat in Zinc ions.

Immune Defence is one of the best supplement to boost the immune system available in the market today. This review will tackle the ingredients, benefits, and side effects if there are any and what’s our take on this product.

Knowing the ingredients of a product gives a hint on its potential good and bad effects. Now let us take a look on Immune Defence’s Active Ingredients:

Zinc Gluconate – a naturally occurring mineral. Zinc is essential for growth and the development and health of body tissues. This trace element is crucial in our health. Since the human body does not store excess zinc, it must be consumed regularly as part of the diet. Some of its uses are for boosting the immune system, improving growth and heath in zinc-deficient infants and children, treating some illnesses like common colds and other respiratory infections, and many more.”Is necessary for the maintenance of bone homeostasis and the level of Zn was reported to be decreased in RA patients and collagen-induced arthritic rats. Effective delivery of Zn has been reported using zinc gluconate”.(ACCORDING TO ACS Biomaterials Science & Engineering)

Rosehip – is from the wild rose plant Rosa canina, Rosehips are packed full of vitamin C, E and B, and other antioxidants and minerals. They also contain a substance that fights inflammation. Because of its contents, some people take it as a source of vitamin C to prevent and treat colds, flu, and vitamin C deficiencies.

Acerola – is a fruit of the plant Malpighia glabra or M. emarginata, a small tree that is native to Central America, northern South America, Mexico, and the Caribbean. “It is a rich source of vitamin C and used to prevent vitamin C deficiency, to treat scurvy (a disease caused by vitamin C deficiency), common colds, diarrhea, liver problems, and other conditions.Outstanding results for vitamin C, phenols, and antioxidant enzyme activity.”(ACCORDING TO Journal of Agricultural and Food Chemistry)

Anise seed – is a flower from the plant Pimpinella anisum; it has a distinct, licorice-like taste and is often used to add flavor to desserts and drinks. Anise is also known for its powerful health-promoting properties and acts as a natural remedy for a wide variety of ailments. It is low in calories but contains the right amount of several vital minerals, including iron, manganese, and calcium. Animal and test-tube studies have found that anise seed is rich in antioxidants and can reduce inflammation to help prevent chronic disease. “It is also effective in polishing of teeth. In some traditional texts, anise is mentioned for melancholy, nightmare, and also in treatment of epilepsy and seizure.” (ACCORDING TO ISRN Pharm)

Vitamin A -research shows it enhances the body’s defense mechanism against numerous infectious diseases. Studies on Vitamin A’s abilities are ongoing, and scientists are on a constant quest to learn more. “According to a new study in Nature, pregnant mice whose diet lacked vitamin A produced offspring with smaller-than-normal lymph nodes (2014, DOI: 10.1038/nature13158)”.(Chem. Eng. News)

Vitamin C – research shows Vitamin C is an immune system booster that it works. Among other things, Vitamin C is an antioxidant that helps to cleanse the body by removing the toxins that build up naturally over time that may negatively affect health. Vitamin C also aids immune function by supporting the production of white blood cells – one of the body’s first lines of defense. “Vitamin C appears to play a role in a number of neutrophil functions including increased chemotaxis, increased particulate ingestion, enhanced lysozyme-mediated non-oxidative killing, protection against the toxic effects of superoxide anion radical.” (ACCORDING TO Indian J Clin Biochem)

Vitamin E – although your body is capable of storing Vitamin E, you still need to take steps to ensure you are getting an adequate amount. Research shows that it has a significant role in the aging process, so it is vital, especially to the elderly, because the aging process weakens cellular immunity. “Its role in anti-inflammatory processes, its inhibition of platelet aggregation and its immune-enhancing activity.” (ACCORDING TO Sultan Qaboos Univ Med J.)

SIDE EFFECTS OF Immune Defence

Just like Charles Churchill said, ” the best things carried to excess are wrong,” Immune Defence taken in wrong dosage and frequency could give your body problems instead of solutions. It contains only natural ingredients at safe amounts. Taking the zinc lozenges as advised (1 lozenge every 2 hours when required – do not take more than four capsules per day) causes no side effects. If taken on an exceeded dose, it may cause abdominal pain, nausea, lethargy, anemia, and copper deficiency

However, if you take particular medications, we recommend asking your physician first before starting in Immune Defence. It may cause adverse reactions when taken with some medicines due to its contents. Your safety will always come first, so to avoid trouble better ask your doctor. If you experience some sort of unpleasant reaction, immediately stop using the product, consult your doctor as necessary, and make a report on the manufacturer or on their official website.

If you would ask if this product could protect you from the Novel Corona Virus (COVID-19), well, here it is, there is no evidence to suggest that taking Immune Defence will prevent you from getting coronavirus. However, the essential vitamins and minerals that make up Immune Defence have been proven in studies to support the immune system. Its actual benefits are as follows:

Immunity is defined as the balanced state of multicellular organisms having adequate biological defenses to fight infection, diseases, or other unwanted biological invasions while having adequate tolerance to avoid allergy, and autoimmune diseases. Immune Defence claims that it boosts the immune system. Based on the research we made on this product, it is proven effective, but before taking into consideration trying out Immune Defence, let us check out some of the reviews we could find on the web. These testimonies would be a big help in deciding to try on the product or not.

Overall, the Immune Defence supplement is one that many users should consider trying. It provides effective and quick betterment, at a low cost. It is suitable for both people who would like to remain clear of the flu and colds, as well as those who are currently suffering from it. This is because it helps to reduce the symptoms, as well as eradicating them.

There is a lot of evidence to suggest that the ingredients included in Immune Defence are exactly what’s needed but not only protect but also improve your immune system. Whether you are young or under stress, middle-aged with little time to fight off colds and infections or elderly and have a lower immune system, this product can help a magnitude of people!

Immune Defence is an excellent supplement that will bolster your health-protecting your body from pathogens and viral infections. For those who want to enhance and improve your immunity, Immune Defence booster pills should be at the top of your list. We advise you to follow the suggested use and make sure that you follow the recommended dosage and instructions to boost your immunity.

It is a very good quality product and as it is coming from a reputable brand. I can trust if for building my and my family’s immunity. I have been using it since January 2020. It has helped me a lot to keep up with my immunity especially in these times of the pandemic where the immunity of individual and family is of utmost importance.
I just felt the need to post my review so that all of us can take benefit from this supplement and stay strong in this situation.

After checking for feedbacks and reviews, we found out that Immune Defence has a few. Although most of them said positive things on the product, and that it is a great supplement to boost the immune system especially during this time of the pandemic.  Based on the advantages and disadvantages that we found out and will be discussed below, this product deserves a 4-star and worth the money if you decide to try and use it.

Currently, because [post_title] [acf field="no-review-reason"] , we haven't been able to find much feedback about the product You can check back later for any updates we add in the future.

Reinforce your body’s immunity to highly infectious cold and flu viruses by ensuring your body has sufficient amounts of zinc and vitamins, with Immune Defence, you’re giving yourself the best possible chance of fending off seasonal illnesses. Together with a healthy lifestyle – exercising regularly, consuming healthy balanced- diet, maintaining a healthy weight, and avoiding stress, Immune Defence would give the best results in immunity boosting.
Immune Defence lozenges are manufactured in the UK by Swiss Research Labs. The company is based in Nottingham and ships its products worldwide. Swiss Research Labs is not a massive player in the supplement industry, but a reputable company that’s registered at British Companies House and appears to conduct its business credibly.
The lozenges provide extra zinc, along with the vitamins, A, C, and E. Research shows the immune system needs adequate amounts of all four of these nutrients to keep it in great shape. As easy as 1, 2, 3, Immune Defence offers these micronutrients, so no need to doubt about its efficacy, try it and stay healthy.