People have been demanding high-quality vegan protein supplements for quite some time now and 1st Phorm has finally stepped out with a solution. Meet Vegan Power Pro by 1st Phorm - all-natural, vegan-friendly and great-tasting formula that's bound to make it big out there on the market. It's just been released though, so you won't be able to find a lot of information online. But we know everything about it... So let's kick things off and see what sort of benefits can you expect from Vegan Power Pro!

Rumor has it that many people wanted to see 1st Phorm dwell into vegan-friendly protein supplements, but it seemed as though it will never happen. However, out of the blue, 1st Phorm managed to surprise us all with their recent announcement of Vegan Power Pro – their first-ever vegan protein powder.

Vegan Power Pro by 1st Phorm seems like it's going to make a storm out there on the market by delivering godlike performance while being gluten-free, GMO-free and, as its name suggests – vegan-friendly.

As you'd come to expect from 1st Phorm, Vegan Power Pro features only the highest quality vegan-friendly protein. This makes it the optimal solution not just for vegans but for virtually anyone looking for a potent protein. Furthermore, lactose intolerant people will also greatly benefit from Vegan Power Pro due to the fact it doesn't consist of any animal sources of protein.

Vegan Power Pro by 1st Phorm can be used in several ways – for muscle repair, lean muscle growth and even good old pure bulking. How will you use it? Well, that's up to you… So, if you are interested in what this supplement has to offer, make sure you continue reading and learn all about Vegan Power Pro ingredients, side effects, reviews and plenty more!

Unfortunately, we don't know a great deal about this supplement's ingredients just yet. However, there's an Instagram post by g1fitlife which gives us a sneak peek at the ingredients label on the backside of the bottle. Here's what we're talking about:

Announcement!!! That New,New Is Dropping soon. @1stphorm Vegan Power Pro. For all of my plant based clients. This is what we have been waiting on. They have spend the last few years doing research and developing a quality vegan protein. Check out the nutrition and ingredient panel. Nothing but the best and Macros are 💯good. I am not vegan but I am super excited about this product and I can’t wait for its release. . . Raise your hand if you are excited 🙋🏽‍♀️ . . . . #iam1stphorm #legionofboom #thatnewnew #veganpowerpro #vegan #plantbased #wedothework #1stphorm #g1fitlife #fitnessrxstudiosllc #frompregotofit #iamfitnessrx

As you can see from the post above, there's a total of 19 grams of protein per serving which is roughly 38% of the suggested daily value. Additionally, we can see that the formula consists of 3 blends – 1st Phorm Green SuperFood Complex (100mg of organic ingredients including barley grass, spirulina, wheatgrass, kale, spinach and so on), 1st Phorm Phytonutrient Complex (50mg of organic powders such as Strawberry, cranberry, elderberry, beet juice and more), and Enzyme Blend (50mg of lipase, lactase, protease, and amylase)

Vegan Power Pro by 1st Phorm is now available for purchase! This means that its official ingredients list is available as well. With that being said, let's take a quick look at it right away: 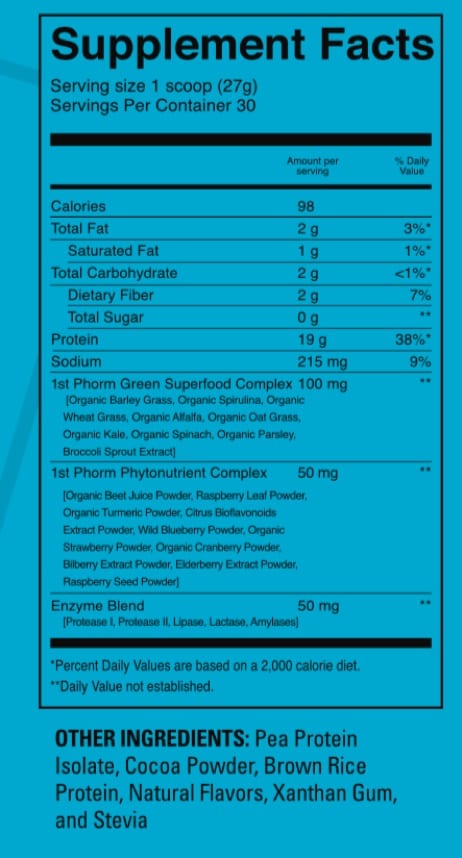 1st blend in Vegan Power Pro's formula consists of well-respected organic and all-natural ingredients, all of which are essential for your general well-being.

The likes of barley grass, spirulina, wheatgrass, oat grass with the addition of kale and spinach (and others) will give your body all the nutrients it needs to create an optimal muscle-building environment.

Let's not forget about their antioxidant effects too, allowing you to get the most out of your body and regulate your pH levels.

The dosage stands moderately high at 100mg, meaning 1st Phorm has struck the golden middle and did a wonderful job with dosing.

As far as 1st Phorm's phytonutrient complex is concerned, its main goal is to reduce inflammation throughout your entire body. It's also essential for removing tissue-damaging free radicals which aren't something you'll often see with other direct competitors.

Considering the fact Vegan Power Pro by 1st Phorm just hit the shelves a couple of days ago, it's not that surprising to see a complete lack of side effects. Sure, with such a powerful protein powder, some mild side effects can be expected, but so far nothing has been reported.

Knowing 1st Phorm's reputation, side effects will not be severe by any means so there's no need to worry.

When it comes to pricing, you can buy Vegan Power Pro for roughly $50.

As far as flavors are concerned, 1st Phorm has gone with Chocolate, Chocolate Peanut Butter Cup, and Vanilla… but that doesn't mean that's all of them. Knowing 1st Phorm's reputation for making high quality and great-tasting supplements, there's no reason to think this one will be different.

Power Vegan Pro is bound to be tasty… Heck, Instagram user howestrong_i_am has already tasted it and he claims it's pretty good: 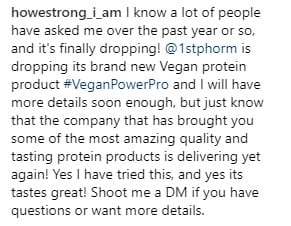 As far as Vegan Power Pro reviews are concerned, here's a quick look at 2 of them which I found rather interesting:

“First time trying a Vegan protein and I'm impressed! Smooth taste without the chalkiness. I would recommend anyone that is currently on a diet plan or looking for a clean protein without the added sugars and calories”

“Most vegan proteins are very gritty. Yours was not gritty at all and it mixed pretty good. I liked the taste as well. I could tell it was vegan, but it was way better than other vegan proteins I have tried in the past.”

What's All This Hype About?

Well, first of all, it's a big deal to see 1st Phorm finally create an all-vegan protein powder. This will definitely come as great news to plenty of people who have been cheering for a potent vegan protein supplement for the last year or so.

Yes, there are several solid options out there, but I'm pretty sure Vegan Power Pro will be on a whole different level. I mean, just by checking out that blurry Instagram post on which the ingredients label is somewhat visible, experienced eyes can notice the dosages (and included ingredients) are absolutely on point.

If it tastes good too (and we all know this has been a problem for other all-vegan supplements), then Vegan Power Pro by 1st Phorm will definitely be a winner!

As already mentioned above, Vegan Power Pro by 1st Phorm is now available for purchase.

Hurry up before the initial stock is gone for good.

Free radicals and oxidative stress are everywhere that is why it is essential that we keep our body healthy. Eating nutritious food may not be enough so it is recommendable to take supplements with superfoods to helps you boost your immunity and energy, as well as preventing or slowing the damage to cells caused by free radicals. This is what Opti-Reds 50 promised effects. In this review, you will have a better understanding of its ingredients benefits, side effects, customer reviews, and our recommendation if this product is worth to try.