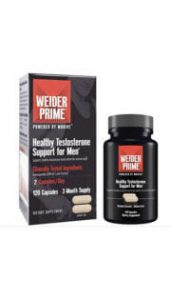 Did you guys know that your testosterone levels lower for roughly 1% per year after the age of 30? Well, it's a scientifically proven fact.. and today's supplement aims to fix that for you. Well, not exactly fix but, reduce the fall, at least. You see, Weider Prime is not your typical testosterone booster. Nope! This is a “Healthy Testosterone Support For Men“.In other words, this probably won't significantly increase your testosterone levels but merely keep them at above average levels for your age.

In other words, this probably won't significantly increase your testosterone levels but merely keep them at above average levels for your age. Additionally, it also promotes lean body mass and is gluten-free meaning a lot of people will have no issues with using it.

With that said, if you would like to learn more about Weider Prime, makes sure you read the in-depth review below. It tackles standard traits including the ingredients, user feedback, FAQs and more.

Like I stated above, we're going to to take a closer look at Weider Prime's ingredients to see if their claims have anything to back them up.

First off, here's the official label of Weider Prime kindly listing out all ingredients that can be found inside:

Vitamins are organic compounds and vital nutrients which our bodies need to function properly. Inside of Weider Prime, you'll find B6, B12, and D3, all of which are equally important for your general health and well-being.

Also known as Diindolylmethane. This ingredient is believed to block estrogen effects once it gets inside one's body. Additionally, it's also used for treating enlarged prostate and PMS.

The extract of Ashwagandha plant is used for treating all sorts of diseases ranging from arthritis, anxiety, and insomnia to asthma, bronchitis and so on. Besides that, people also use it for preventing the effects of aging as well as increasing sexual desire. It's a win win ingredient, that's for sure!

Origins from black and white pepper. This ingredient is used for stomach upset, bronchitis and even cholera. Apart from that, it's also believed that it relieves nerve pain which is a common issue with aging.

As far as side effects are concerned, if you follow the dosage instructions carefully, you should be alright. However, if you exceed on your doses, you might end up with nasty diarrhea.

To understand the quality of this supplement even further, we must check out its user feedback.

“This works great for my husband. I purchased his first box at Costco at about the same price. When he ran out he noticed a difference in his over all energy and zest and asked me to buy it again! So glad he did!”

“My husband has been taking these for a few months now and absolutely loves them. He was purchasing them from someone else previously until finding these on Amazon for quite a bit cheaper. He is even recommending them to friends. We will continue to be loyal customers.”

Here's the final review which nicely sums up the story:

As some of you who know me in real life know, I'm not getting any younger. I'm almost 40 now and I've been stressing about my testosterone levels ever since they naturally started to drop. Of course, in such a situation, it's no wonder I'm going to be interested in these products… Especially when I find a good one like Weider Prime.

It packs a damn fine number of vitamins as well as other nutrients which do their best to prevent effects of aging. Other than that, they take good care of one's prostate and are in charge of keeping a healthy body. If that's something you want for yourself, then Weider Prime is a great option!

If this is the question you're asking yourself, then you must've missed the link above…

Anyway, if you want to buy yourself a bottle of Weider Prime and see what's the hype all about, you'll best off doing so via Amazon. Heads up – it's currently on 23% discount which means you need to hurry up if you want to get it.